With Western's many active international partnerships and research collaborations, Western representives are abroad at any given time of the year. Official delegations from the University to specific countries and institutions occur periodically to expand partnerships, develop new connnections, reconnect with alumni or establish international research centres.

Highlights of recent official delegations are below:

Western President Amit Chakma accompanied Their Excellencies the Right Honourable David Johnston, Governor General of Canada, and Mrs. Sharon Johnston, on an official state visit to China. During the visit, the delegation attended an official signing ceremony to launch a new business-law program between the Ivey School of Business at Western and the China University of Political Science and Law (CUPL). Western's Faculty of Law is also a key partner in the program and will participate in delivering some of the course content in relation to securities regulation, corporate finance and corporate law generally. 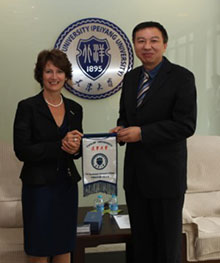